Each rule is an async Python function annotated with the decorator @rule, which takes any number of parameters (including zero) and returns a value of one specific type. Rules must be annotated with type hints.

Although any Python type, including builtin types like int, can be a parameter or return type of a rule, in almost all cases rules will deal with values of custom Python classes.

Generally, rules correspond to a step in your build process. For example, when adding a new linter, you may have a rule that maps (Target, Shellcheck) -> LintResult:

You do not call a rule like you would a normal function. In the above examples, you would not say int_to_str(26) or run_shellcheck(tgt, shellcheck). Instead, the Pants engine determines when rules are used and calls the rules for you.

Each rule should be pure; you should not use side-effects like subprocess.run(), print(), or the requests library. Instead, the Rules API has its own alternatives that are understood by the Pants engine and which work properly with its caching and parallelism.

All of the registered rules create a rule graph, with each type as a node and the edges being dependencies used to compute those types.

For example, the list goal uses this rule definition and results in the below graph: 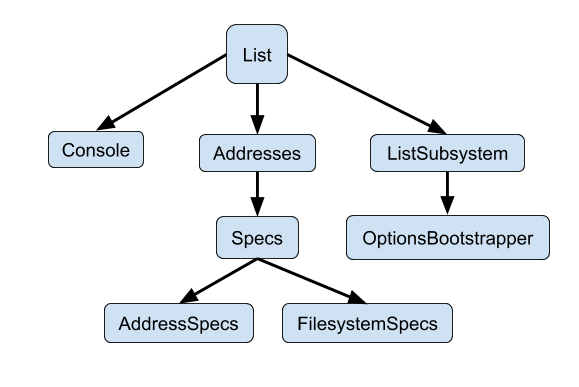 At the top of the graph will always be the goals that Pants runs, such as list and test. These goals are the entry-point into the graph. When a user runs ./pants list, the engine looks for a special type of rule, called a @goal_rule, that implements the respective goal. From there, the @goal_rule might request certain types like Console and Addresses, which will cause other helper @rules to be used. To view the graph for a goal, see: Visualize the rule graph.

The graph also has several "roots", such as Console, AddressSpecs, FilesystemSpecs, and OptionsBootstrapper in this example. Those roots are injected into the graph as the initial input, whereas all other types are derived from those roots.

The engine will find a path through the rules to satisfy the types that you are requesting. In this example, we do not need to explicitly specify Specs; we only specify Addresses in our rule's parameters, and the engine finds a path from Specs to Addresses for us. This is similar to Dependency Injection, but with a typed and validated graph.

If the engine cannot find a path, or if there is ambiguity due to multiple possible paths, the rule graph will fail to compile. This ensures that the rule graph is always unambiguous.

Rule graph errors can be confusing

We know that rule graph errors can be intimidating and confusing to understand. We are planning to improve them. In the meantime, please do not hesitate to ask for help in the #plugins channel on Slack.

Also see Tips and debugging for some tips for how to approach these errors.

await Get - awaiting results in a rule body

In addition to requesting types in your rule's parameters, you can request types in the body of your rule.

Add await Get(OutputType, InputType, input), where the output type is what you are requesting and the input is what you're giving the engine for it to be able to compute the output. For example:

Pants will run your rule like normal Python code until encountering the await, which will yield execution to the engine. The engine will look in the pre-compiled rule graph to determine how to go from Process -> ProcessResult. Once the engine gives back the resulting ProcessResult object, control will be returned back to your Python code.

In this example, we could not have requested the type ProcessResult as a parameter to our rule because we needed to dynamically create a Process object.

Thanks to await Get, we can write a recursive rule to compute a Fibonacci number:

Another rule could then "call" our Fibonacci rule by using its own Get:

The verbose constructor for a Get object takes three parameters: Get(OutputType, InputType, input), where OutputType and InputType are both types, and input is an instance of InputType.

Instead, you can use Get(OutputType, InputType(constructor arguments)). These two are equivalent:

However, the below is invalid because Pants's AST parser will not be able to see what the InputType is:

Why only one input?

Currently, you can only give a single input. It is not possible to do something like Get(OutputType, InputType1(...), InputType2(...)).

Instead, it's common for rules to create a "Request" data class, such as PexRequest or SourceFilesRequest. This request centralizes all of the data it needs to operate into one data structure, which allows for call sites to say await Get(SourceFiles, SourceFilesRequest, my_request), for example.

See https://github.com/pantsbuild/pants/issues/7490 for the tracking issue.

Every time your rule has the await keyword, the engine will pause execution until the result is returned. This means that if you have two await Gets, the engine will evaluate them sequentially, rather than concurrently.

You can use await MultiGet to instead get multiple results in parallel.

The result of MultiGet is a tuple with each individual result, in the same order as the requests.

You should rarely use a for loop with await Get - use await MultiGet instead, as shown above.

MultiGet can either take a single iterable of Get objects or take multiple individual arguments of Get objects. Thanks to this, we can rewrite our Fibonacci rule to parallelize the two recursive calls:

Types used as inputs to Gets or Querys must be hashable, and therefore should be immutable. Specifically, the type must have implemented __hash__() and __eq__(). While the engine will not validate that your type is immutable, you should be careful to ensure this so that the cache works properly.

Because you should use immutable types, use these collection types:

Unlike Python in general, the engine uses exact type matches, rather than considering inheritance; even if Truck subclasses Vehicle, the engine will view these types as completely separate when deciding which rules to use.

You cannot use generic Python type hints in a rule's parameters or in a Get(). For example, a rule cannot return Optional[Foo], or take as a parameter Tuple[Foo, ...]. To express generic type hints, you should instead create a class that stores that value.

To disambiguate between different uses of the same type, you will usually want to "newtype" the types that you use. Rather than using the builtin str or int, for example, you should define a new, declarative class like Name or Age.

Python 3's dataclasses work well with the engine because:

You do not need to use dataclasses. You can use alternatives like attrs or normal Python classes. However, dataclasses are a nice default.

You should set @dataclass(frozen=True) for Python to autogenerate __hash__() and to ensure that the type is immutable.

NamedTuple behaves similarly to dataclasses, but it should not be used because the __eq__() implementation uses structural equality, rather than the nominal equality used by the engine.

Sometimes, you may want to have a custom __init__() constructor. For example, you may want your dataclass to store a tuple[str, ...], but for your constructor to take the more flexible Iterable[str] which you then convert to an immutable tuple sequence.

Normally, @dataclass(frozen=True) will not allow you to have a custom __init__(). But, if you do not set frozen=True, then your dataclass would be mutable, which is dangerous with the engine.

Instead, we added a decorator called @frozen_after_init, which can be combined with @dataclass(unsafe_hash=True).

Collection: a newtype for tuple

If you want a rule to use a homogenous sequence, you can use pants.engine.collection.Collection to "newtype" a tuple. This will behave the same as a tuple, but will have a distinct type.

If you want a rule to use a homogenous set, you can use pants.engine.collection.DeduplicatedCollection to "newtype" a FrozenOrderedSet. This will behave the same as a FrozenOrderedSet, but will have a distinct type.

You can optionally set the class property sort_input, which will often result in more cache hits with the Pantsd daemon.

To register a new rule, use the rules() hook in your register.py file. This function expects a list of functions annotated with @rule.

Conventionally, each file will have a function called rules() and then register.py will re-export them. This is meant to make imports more organized. Within each file, you can use collect_rules() to automatically find the rules in the file.